The History of Licorice 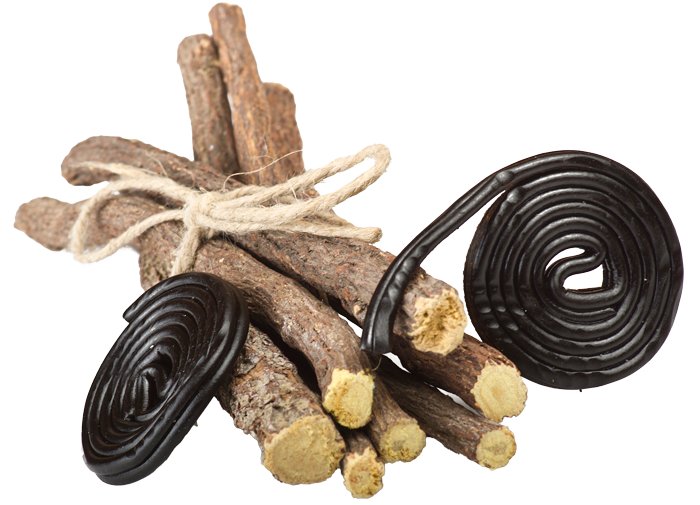 The nostalgia of the sugary taste of licorice brings back fun memories of savouring every bite of this treat’s intense yet addicting sweetness. For centuries, licorice has become one of the most iconic sweet treats around the globe. We are venturing into the history of this yummy indulgence.

The Root Of It All

The flowering plant, Glycyrrhiza glabra, is the true root of this candy. The plant is native to southern Europe and Western Asia, and when found in the wild, it stands five feet tall with purple and blue flowers. The extract is sweet, aromatic and up to 50 times sweeter than sugar and is used in everything from medicine to food. The sweet-tasting compound anethole gives this extract the special boost needed to flavour savoury treats. Foods like fennel and anise also contain anethole, giving them their recognizable licorice flavour.

A Brief Look Back

Licorice candy as we know it didn’t come to fruition until the 13th century. Before that, sweet licorice was brewed into beers mainly. People consumed it for medicinal and recreational purposes. When the Renaissance started, candy started to pop up in sweets and cakes. So, where did it all start?

Many notable figures in history weren’t shy about their love of licorice. Roman emperors Alexander the Great, Indian prophet Brahma, and Egyptian pharaohs are just some famous people in history to love the sweet treat. French military leader Napoleon Bonaparte devoured so much of it that his teeth turned black!. He always carried around licorice powder and brown sugar in his pocket for medicine and enjoyed drinking it. On his deathbed, Napoleon asked for the root in a bottle mixed with his water. Alexander the Great’s armies ate it in a chewy candy form when there was no water readily available. Former United States President Ronald Reagan loved licorice-flavoured jellybeans so much that he passed a jar around during his meetings. Legend says that licorice root was found in Tutankhamun’s tomb.

In the early days, the root was more commonly utilized as a liquid rather than candy. Widely used for its medicinal benefits, the root was used for over 3,000 years to treat liver disorders, gastric and peptic ulcers, eczema, and infections. The Greeks and the Assyrians used it for therapeutic properties. While marching and in battles, warriors used the root to quench their thirst. Dominican friars were the first to bring it to Europe; black licorice was cultivated in Pontefract, England, in the 16th century—this would become the centre of the sweet root’s confectionery industry.

The first step when processing licorice root is to shred the root. Then it is ground and sifted, making it into a powder, which is used in some medicines. The remainder is coarse and covered in a solution producing liquid extract.

The liquid is usually used for syrups or as a paste that helps form candy bases. It can be used to flavour some tobacco products or by brewers who added licorice root to their beer to give it that foamy head, so many people love. It was even added to fire extinguishers because it was free of oxygen, so it could be used to help fight oil fires before chemical extinguishers were invented. The stringy leftover fibres were dried and used as box boards and insulating walls. Licorice root has had so many uses in history!

Today the term “licorice” is used loosely. Besides the traditional black candy, you’ll see the term used to describe other candy, like red licorice, but its taste is very different from actual licorice! Simply put, the “real” stuff is black.

The most popular licorice brands like Twizzlers and Red Vines don’t usually contain any licorice extract. For this reason, they have typically been labelled “twists” instead of licorice, as they contain fruit flavouring instead of the licorice root extract. But this doesn’t stop consumers’ love for red “licorice.” The United States loves the red flavour so much that Red Vines regularly hits over $60 million in yearly sales. Overall, the licorice candy category hits above $436.5 million in sales annually.

In Nordic countries and the Netherlands, licorice candy is usually quite salty. No one knows why anyone decided to add ammonium chloride to the root extract to make a salted version. Some people believe pharmacists may have tried to liven up the cough syrups back in the day, as it’s a potent concoction that can clear sinus cavities. By the 1930s, the trend spread beyond the Nordic region. Going by the name “salmiak,” this type of candy tastes a bit bitter – most people either love it or hate it. In Scandanavia, you’ll find dozens of varieties of salty stuff.

The root extract was probably first used for its medicinal properties. It has anti-inflammatory products that help with many medical issues due to the active ingredient of glycyrrhizin. It’s also a source of vitamins E, B1, B2, B3, and B5. It even contains some magnesium, potassium, zinc, iron, phosphorus, and calcium. It’s been known to help with slow digestion and other gastrointestinal disorders. The root extracts are known to prevent and treat gum disease and boost oral health. Of course, this doesn’t mean sitting down to eat a lot of licorice will help with medical issues, as most candy has added ingredients and won’t help alleviate physical problems. But a couple of bites won’t hurt!

Some people love to use the licorice extract in the kitchen, where the powder can be added to many culinary creations. It can easily be mixed with flour to prepare pasta or sweets or sprinkled over pasta or meat to give a bittersweet taste. Many people enjoy their liquor with a licorice flavour, though it can also be used in herbal teas and infusions.

The United Kingdom loves all kinds of licorice candy, while the salty type is much more popular in continental Europe. Salty licorice is often mixed with menthol or mint in the Netherlands. Though it might have a different taste, the Netherlands is known to consume more licorice per capita than any other place in the world – the Dutch eat four pounds a year! Though Spain is not known for their licorice consumption, they are the biggest licorice drop manufacturer in Europe, mainly exporting to Scandinavian countries, Germany, and the Netherlands. Finally,   the United States celebrates licorice every year with National Licorice Day on April 12.

Sweet licorice has been used for thousands of years for dozens of purposes. Though it’s now most popular as a sweet candy treat, the satisfying taste is well-loved in different forms around the world by millions of people. The future is bright for this ancient root as it keeps growing in popularity over the years.

Sign Up For Licorice News, Special Offers, Contests and Giveaways.